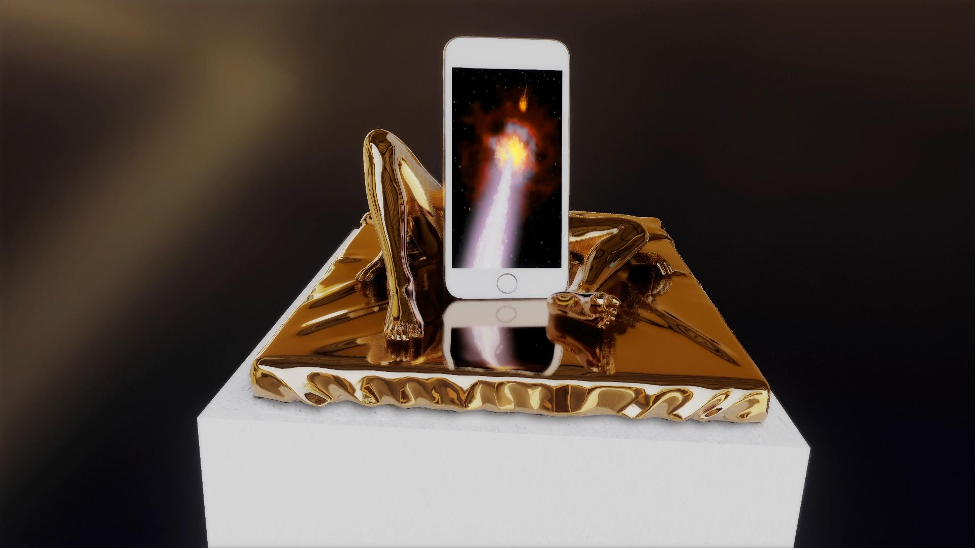 Carla Gannis’ virtual installation was inspired by the painting made by Gustave Courbet “L’Origine Du Monde”(1896). Using this as a source of inspiration, In 2019 Ms. Gannis made a series of sculptures out of bronze and other materials replicating this perspective of a woman’s body. Mr. Courbet’s painting clearly showed a woman with her legs spread, lying down with a sheet over her head.  Ms. Gannis’s version references not only that painting but also the current fad of 3D printing smartphone holders.

For Corpo-Reality Ms. Gannis exhibits  “Origins of The Universe: Dimensioning” which is a social VR and video translation of that 3D-printed sculptural work. This new iteration takes several forms. A GIF of the sculpture on a rotating pedestal invites the viewer to enter a subworld. The spawning point is at the entrance to a monumental nude female figure with her legs spread apart or “hot spot”. As the avatar travels down a corridor illuminated with abstracted images of the cosmos generated by an AI, they arrive at the end of the corridor to see a replica of the sculpture they are inside of at a  much smaller scale. This reclining nude is on a pedestal and has a smartphone between her legs.The smartphone displays a video of the live stream of the images corresponding to the word search ‘Origins of the Universe’. The stream was created by giving a custom app the prompt to capture images related to “origins of the universe”. Once more referencing the title of Courbet’s painting. After exiting the hallway inside the large figure, the avatar appears to be in a cosmos landscape. There is also a soundscape of poetry which is recited by the artist. The poem was jointly created by an AI program and the artist using the prompt “ Origins of the Universe”.

The whole piece functions on a macro/micro level. As Ms. Gannis says,”Courbet’s work was scandalous in the nineteenth century and even in the twenty-first century has caused Facebook account suspensions when posted.  Conversely, on certain sites 3D-printed smartphone holders of the sexualized female body proliferate. Those who identify as female still find themselves objectified, but we are finally living in an age where there has been an increased recognition of females’ contribution to physics, engineering, and computer science. Thus, I have expanded Courbet’s “world” to a “universe,” a universe positioned between a woman’s legs not to signify biological determinism, but to signify the power of the “female archetype” in scientific and cultural realms”.

Synthetic Body-reality is a digital arts exhibition that includes site-specific photography with video, digitally created sculptures, immersive installations, a GIF, uv animation on polygons, and deepfake AI technology. Through 13 artworks, it focuses on the use of the body to express the challenges of the social, political and cultural agenda of the present. The exhibition is […]

Augmented Reality? It is (also) a critical design tool