What is it like to live in a Hyper-world? Close your eyes and imagine a space whose boundary between the real and the virtual is dissolved, a place where the invisible world of databecomes visible and permeates our daily life. You are not the protagonist of Steven Spielberg’s futuristic film Minority Report; you are in one possible scenario by Keiichi Matsuda, the next guest of Meet the Media Guru on 14 October.

Born in 1984, the designer, film-maker and visionary Matsuda mixes Japanese and British origins. In his work he uses interactive videos and installations to explore the fading boundaries between the virtual and the physical– there couldn’t be a more contemporary theme than this – to give life to new urban and spatial scenarios and imagine a new way to interact with the world and the others.

How to bring to the fore the implications of emerging technology, more specifically augmented reality, on human perception and the construction of the surrounding environment? This research brought to life Augmented (Hyper)Reality, a cycle of three films in which Matsuda tells and visualises a number of environments saturated with information and stimuli.

Augmented Reality, an emerging technology defined by its ability to overlap information to the physical space, is part of a paradigm change that follows Virtual Reality; instead of immaterially occupying virtual worlds, the bodily and the virtual are perceived together next to each other, in a layered and dynamic manner. The interface becomes immersive and part of the world in which we live as much as the buildings around us. His Hyper Reality is augmentednot because it adds a new level to the real world, but because it gives a better portrait of a reality we are already immersed in, where bitsand atomsare increasingly blending into one.

What emerges from his films is not just the overcrowding of information, but also the human-centred side of this technology, which can dim the feeling that, in the words of Jonathan Safran Foer, leads us to be “so connected, so distant”.

Today we can take a large amount of information and put it everywhere; we no longer need to look at a screen, to be sat at our desk or to look at our phone. We can simply be in the world. This means that we can strip ourselves of our devices and, instead of focusing on those rectangles, we immediately go back to looking at the world. And this is beautiful. Augmented Reality is a technology centred on man, it is natural as well as intuitive.

Matsuda explores connected environments also using interactive installations, where he reprocesses and makes visible the information that permeate the city every day, which is not perceivable separately through our devices. An example is Prism. Hosted in 2012 at the Victoria and Albert Museum of London, the prism shows an alternative vision of the city, drawing inspiration at once from a multitude of data and presenting them as a “living mosaic of systems and processes”: the image of tourists, businessmen and Londoners frantically moving about corresponds to numbers and intangible data that gain life and become part of the real world. 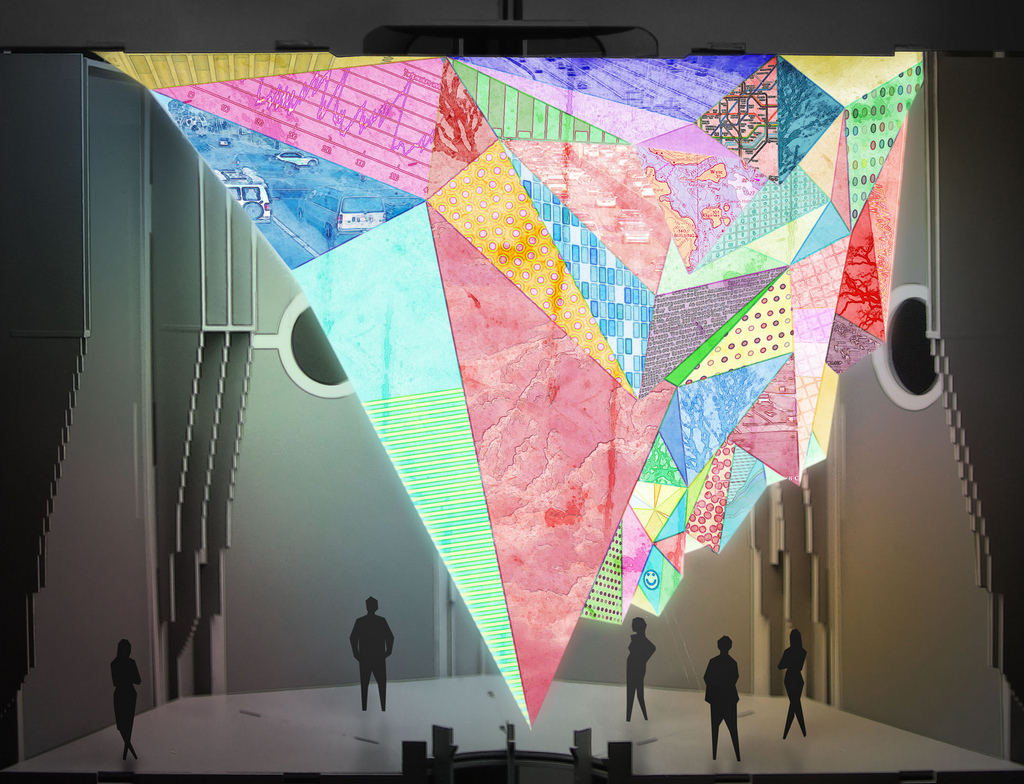 Matsuda processes the concept of immersive environment also by cross-pollinating different art languages. During the concert of the North Netherlands Symphony Orchestra celebrating the first one hundred years of Stravinsky’s composition The Rite of Springhe managed to recreate a virtual forest formed by over fifty light beams activated by the movements of the fifty orchestra musicians, which wrapped the audience in a perfect integration between music and the environment.

In Matsuda’s work, sociological and technological reflections turn into images. Using the immediacy of the cinema languagehe portrays the future with sensitivity and wit, in a dialogue between present, past and future.

The new worlds generate new economies and new ways of working. For this reason the third track of In real, in web, in world opens up to the business world and to the many innovations that have emerged in recent times: from the design of virtual exhibition events to the new frontiers of blended working, from […]