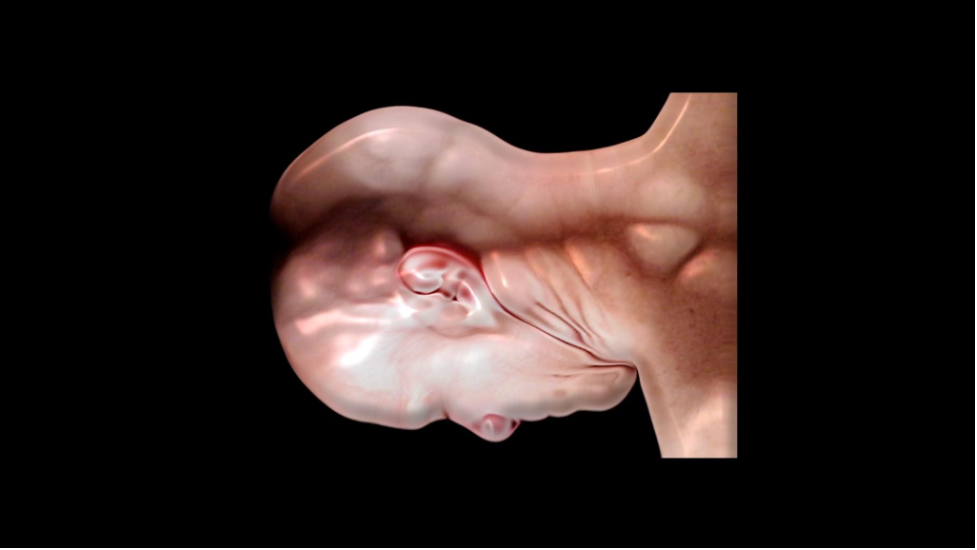 For Synthetic Corpo-Reality, Ms. Allen is exhibiting two videos from the series called Figures In Motion (Figure Crawling and Figure Waiting) which she created as a response to a lifelong interest of bodies in motion. In fact when Ed Catmull made the first female avatar in 1972, Rebecca brought her to life in 1980- 81 as they were developing one of the first 3D animation systems.

To create Figures In Motion Ms. Allen worked with a male and female model and had them crawl on the ground. She captured their movement from a camera mounted overhead. The bodies in the videos are genderless, with a plastic look of the skin as the figures crawls in front of us. The camera’s focus is on the skin making it sometimes into an abstract form as the artist concentrates on more formal concerns in art like color, form, and composition. As Ms. Allen says,”Human forms appear as otherworldly, fluid abstractions. Their intricate, undulating, compelling and at times disturbing movements are realistic and unaltered. The narrative is stripped to the raw perception of movement, drawing from our deep familiarity and visceral response to human motion”.

Jaron Lanier among the 100 most influential people according to Time

Jaron Laniertoo is an old acquaintance of Meet the Media Guru. The first meeting with this brilliant composer, performer, scientist, philosopher, in fact, dates back to 1990, when Jaron – at that time the visionary paladin of Virtual Reality – participated in the first conference on Virtual Worlds in Italy , in Venice, together with […]

What is it like to live in a Hyper-world? Close your eyes and imagine a space whose boundary between the real and the virtual is dissolved, a place where the invisible world of databecomes visible and permeates our daily life. You are not the protagonist of Steven Spielberg’s futuristic film Minority Report; you are in […]

Claudia Hart is considered an early innovator in virtual  imaging, using 3D animation to make media installations  and projections, then later as they were invented, other  forms of VR, and AR.  Ms. Hart has a long engagement with creating gender neutral avatars partially as a result of being exposed to sexual misogyny while being in […]