Punctuated by verses from the artist’s poems, the exhibition itinerary-which will enliven MEET in December and January-includes thematic nuclei of works that highlight some of the milestones in Andrea Bonaceto‘s work and culminates in the Immersive Room with AB INFINITE 1, an Immersive and interactive work powered by Artificial Intelligence.

The itinerary-curated by Luisa Ausenda-begins inside Gallery 1, dedicated to portraits created by the artist and those born from the collaboration with Sophia the Robot, a humanoid robot created by Hanson Robotics. Alongside, a selection of the artist’s physical works is exhibited including those that pay homage to such important figures to the artist as Eugenio Montale and Leonard Cohen. Next are projected digital portraits of pop culture figures such as Elon Musk, George Floyd, Queen Elizabeth II, as well as friends and family of the artist. In the same style as the digital portraits, Bonaceto has created scenes from real life: one of them depicts singer-songwriter Cohen and a group of friends playing guitar on the Greek island of Hydra. 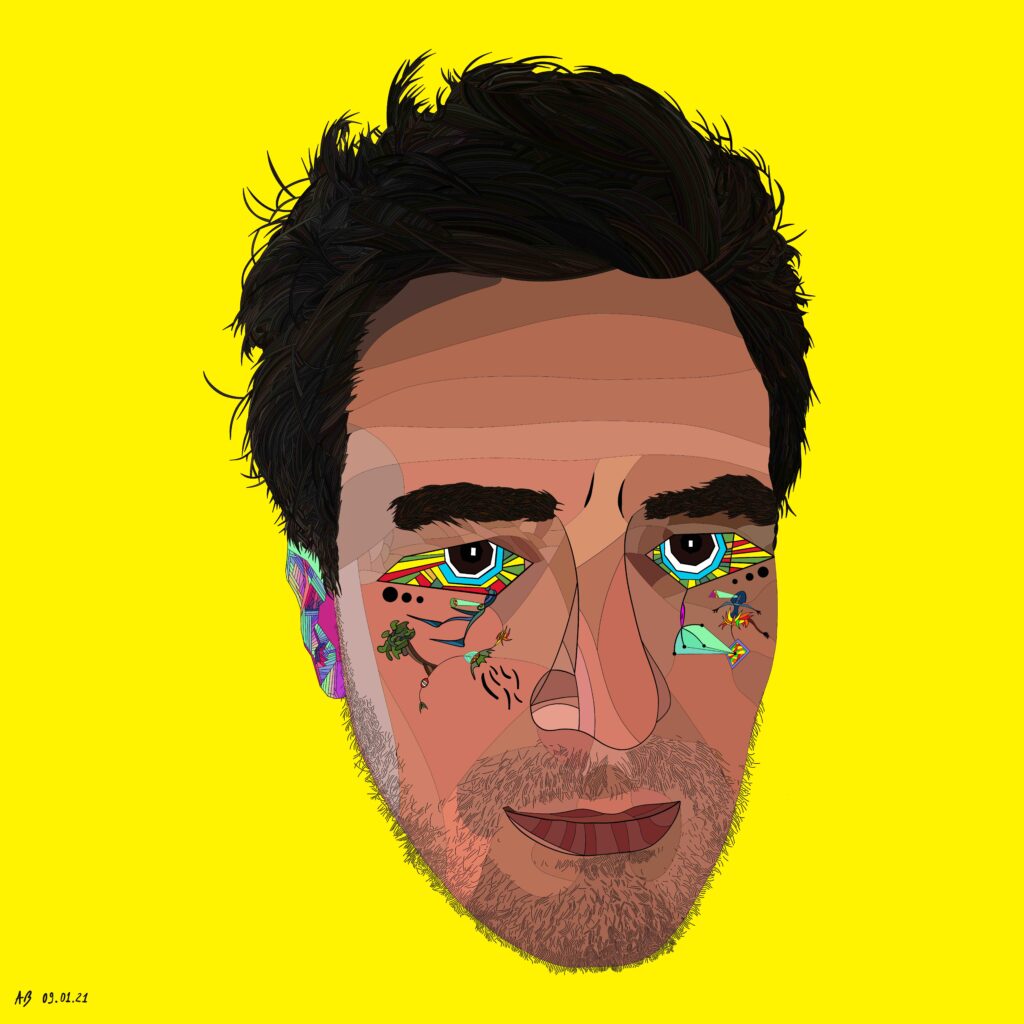 On the Oled screen, there are also portraits of the astronauts Bonaceto included on the front page of the Corriere della Sera he artistically interpreted: Buzz Aldrin, Michael Collins and Neil Armstrong.

In the second Gallery, Visioni Digitali await you. Some of these works juxtapose figurative subjects with abstract forms in a kind of continuous frieze, while others stand out for their strong narrative potential through the use of colorful backgrounds. On the second Oled screen, before arriving inside Gallery 3, the work commissioned to the artist by Corriere della Sera is on display. Bonaceto has in fact interpreted a page from the newspaper from 1969, specifically the one announcing that “Man is on the Moon.” Two versions exist: as programmable art, the NFT of the work will change when Andrea Bonaceto goes to the Moon. In the third and final gallery, the two poems to which the artist has dedicated visual works created with NFT on the Nifty Gateway platform are projected. 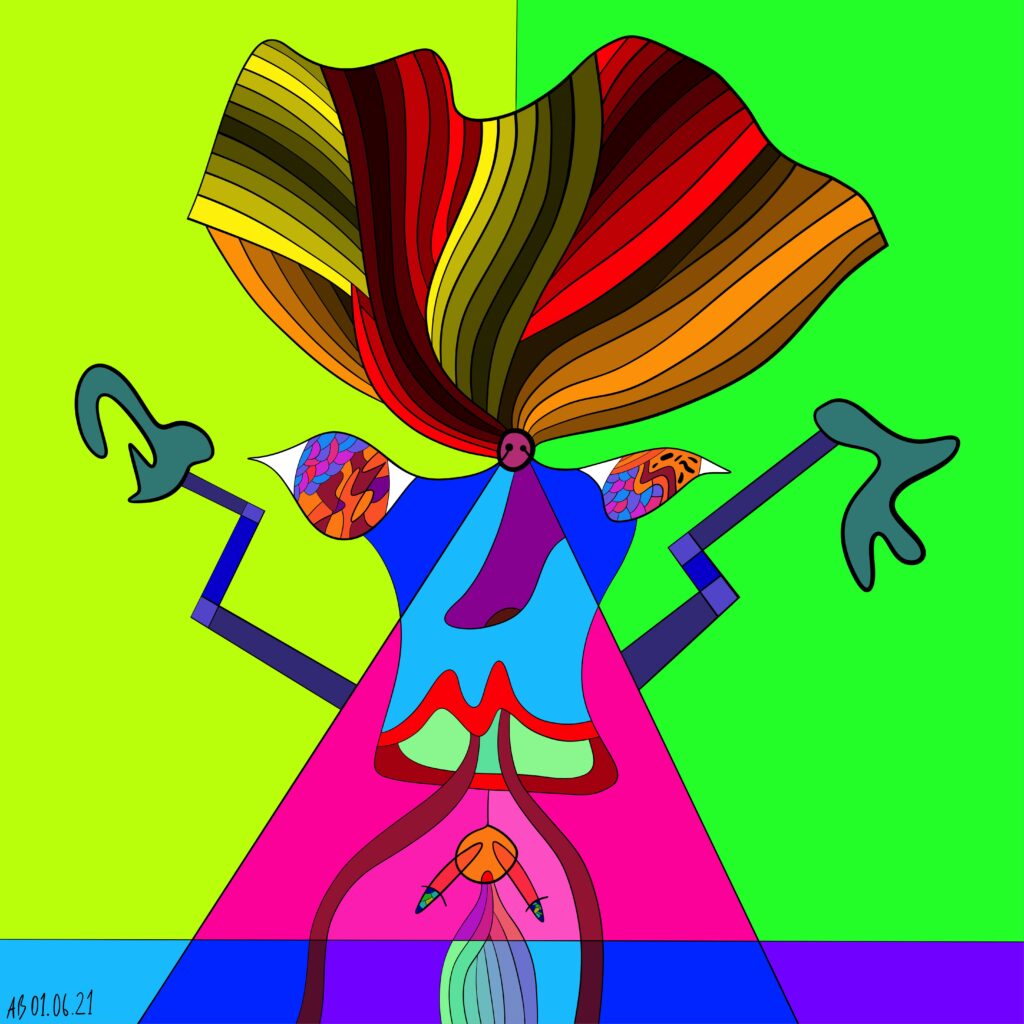 The exhibition culminates in the Immersive Room where AB INFINITE 1, a living narrative open to different interpretations, awaits you. As in a kind of colorful mosaic composition, it combines figurative images with abstract forms. It depicts the artist’s story by portraying both vicissitudes and milestones of his life. Bonaceto’s parents are portrayed sitting around the table with the artist, each with his own placemat in their Tuscan home. There are also his grandchildren, his partner and some of the highlights of his career such as when he started playing guitar on the streets of London thanks to a street musician’s license. Monsters, a cemetery enclosed in a fetish frame, Death and other other otherworldly presences also stand out. 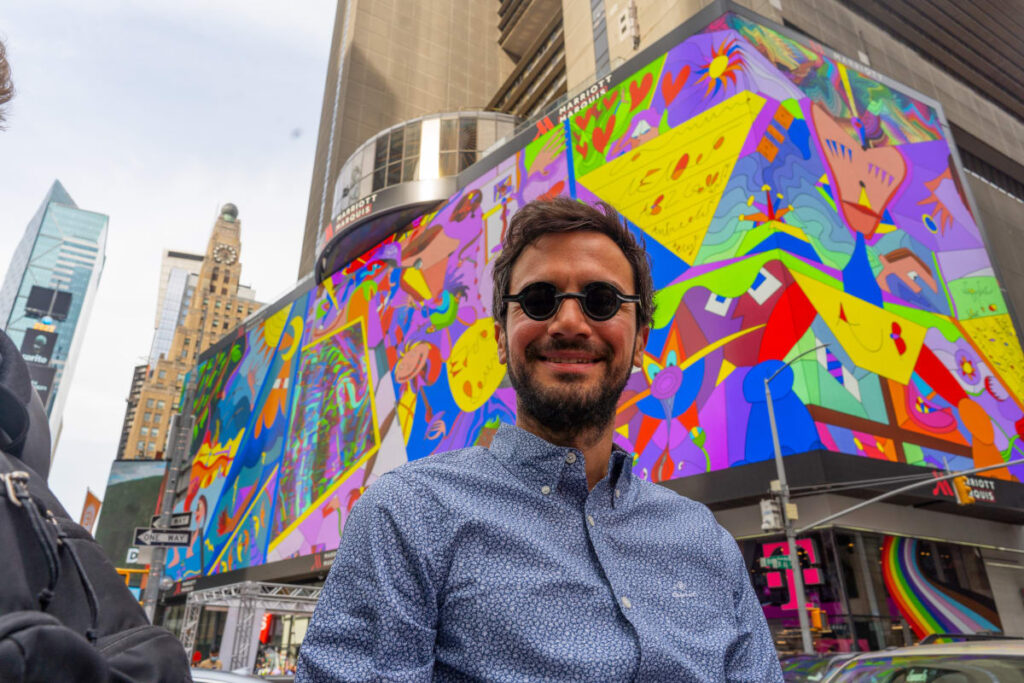 Through an artificial intelligence mechanism created for this project, the public on Instagram and Twitter can help edit AB INFINITE 1 using the hashtag #abinfinite1. Images using this hashtag are processed with AI technology and incorporated into the visual vocabulary of the work. Through the same process, texts posted with this hashtag become part of an evolving poem within the work. The AI image generator designed by the artist uses PyTorch, OpenAI, VQGAN and DeepAI to produce visual responses to images uploaded by the public on social media. The new program was “educated” using a set of the artist’s pre-existing works, royalty-free images, and a color palette taken directly from AB INFINITE 1.

The title of the work echoes the artist’s ideal of generating a cycle that goes “ab” (from the Latin da) the infinite to the origin, symbolized by the number 1. In other words, it goes from self to all and vice versa!

At Meet the Media Guru, Daugherty talked about how artificial intelligence can “re-humanise” the work

Astrophiles, devourers of series dedicated to Space and fans of science and technological adventures: this appointment is for you! We have prepared many immersive and space experiences for you! Are you ready to board the spacecraft that will take you to the Moon?   At 6:30 p.m. we will meet Noemi Forti, author of Moondust, […]

The most beautiful photos of the event

Nao Tokui is a Japanese artist and researcher. He has been exploring the potential expansion of Human Creativity through the use of Artificial Intelligence. His recent works include a collaboration with Brian Eno and AI DJ Project, where a Machine Learning-based DJ plays alongside a human DJ (Tokui, himself), taking turns selecting and playing one […]