Tamiko Thiel has been a visionary pioneer in the field of Art and Technology since the 1980’s. Ms. Thiel, based in Munich, has built a career creating digital art that challenges us to think more broadly about cultural, historic, political and ecological concerns. Her practice explores the interplay of place, space, the body and cultural identity in political and socially critical artworks.

For decades Ms. Thiel has been a master at creating site-specific installations using immersive technologies in both virtual or in physical spaces.  She aims to create an emotional impact on viewers, sometimes in a visceral way and sometimes in a playful way, but always to inspire and provoke us out of complacency. Ms. Thiel uses color, image and sound to create a sort of visual poetry. This prompts us to think about ecological, political and societal concerns as we are captivated by the vibrancy of her moving images.

Ms. Thiel and /p skillfully translated the AR artwork Entering the Plastoscene into a new multi-channel immersive experience for MEET. This work seeks to playfully engage the public in a very serious threat to ocean ecosystems: ocean borne plastic waste. The artwork dramatically places the viewer in the ocean amidst the very plastic detritus that we have put there. This intervention seeks to provoke each of us to examine what we are actively–and more to the point, passively–doing to pollute the oceans. In other words, we are placed directly into the history of the changing oceans and held accountable.

Most of the projections contain images of the plastics in the ocean and the marine life that lives there. However, one of the projections is a live feed showing viewers’ interactions with the fish. As the viewer uses the exhibition tablet to guide the fish, she becomes in some ways the performer for the others present. Unfortunately, the more active the participant is in guiding the fish, the more the fish turn into plastic waste themselves, thus unintentionally creating ocean waste as others look on.

The COVID pandemic unfortunately brought a new hazard to the oceans: disposable masks, gloves, and the addition of an unprecedented amount of single-use plastics (a result of restaurant take-out and the termination or reduction in operations at many recycling facilities).

Approximately eight million metric tons of plastic waste goes into the ocean every year. That is the equivalent of one full garbage truck filled of plastics being dumped into the ocean globally every minute. Some models predict that by 2050 there will be more plastic in the oceans than fish in the se . This ominous prediction makes further Ms. Thiel’s artwork all the more timely. 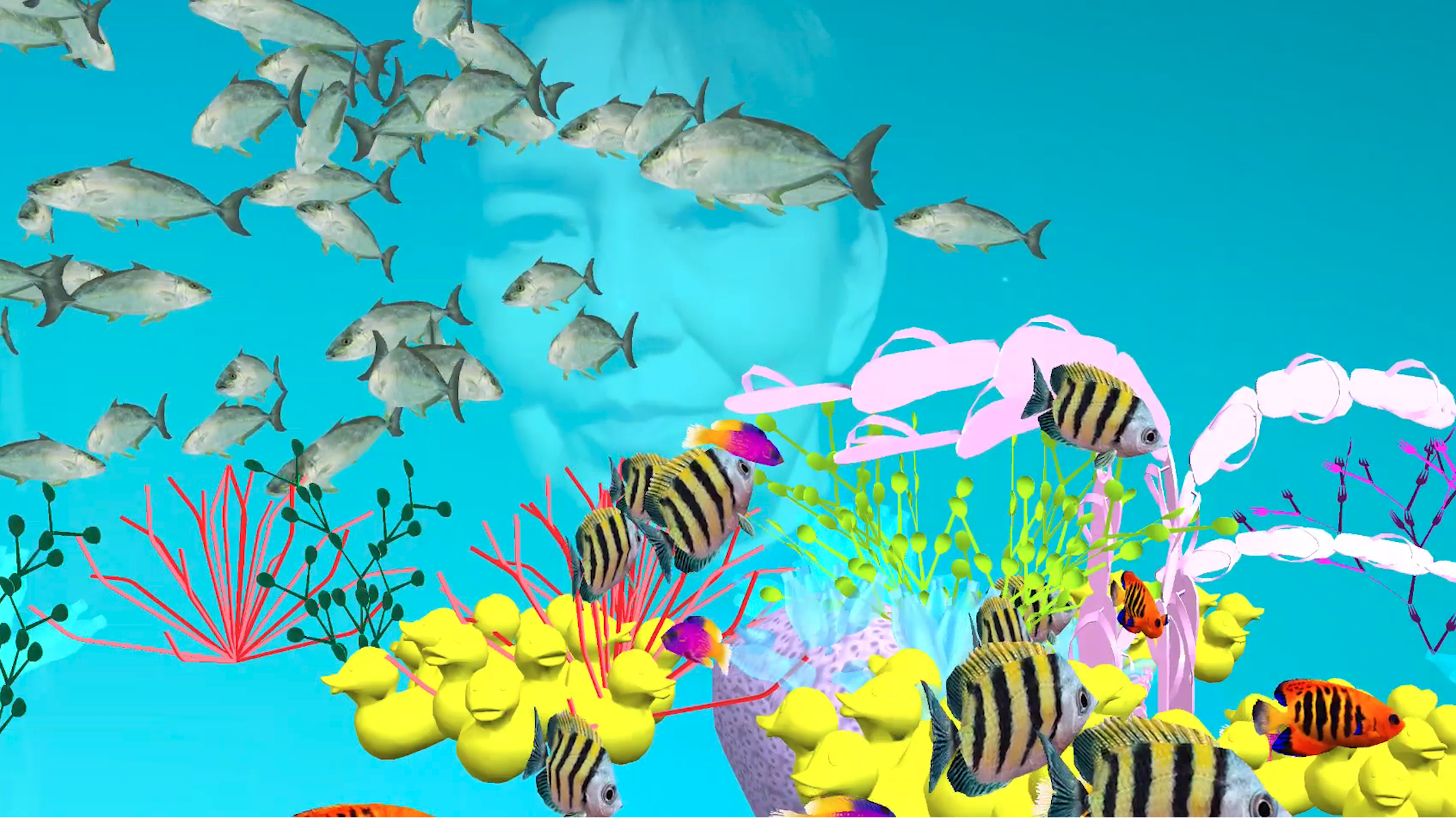 Tamiko Thiel has been a visionary pioneer in the field of Art and Technology since the 1980’s. Ms. Thiel, an American based in Munich, has built a career creating digital art that challenges us to think more broadly about cultural, historic, political and ecological concerns. Her practice explores the interplay of place, space, the body and cultural identity in political and socially critical artworks. Since 2018 she has been collaborating with the artist and software developer /p.

Ms. Thiel was lead product designer for the Connection Machine CM-1/CM-2 A.I. supercomputer, in 1989 the world’s fastest computer and now in the collection of MoMA NY. She created her first virtual world in  1994-1996 as producer & creative director of Starbright World, in collaboration with Steven Spielberg. Her first virtual world artwork, Beyond Manzanar (2000, with Zara Houshmand), is one of the first to be collected by a US art museum (2002, San Jose Museum of Art in Silicon Valley). She exhibited at museums around the world including MoMA (New York), Centre Pompidou (Paris), Tokyo Metropolitan Museum of Photography and ZKM (Karlsruhe), and has been included in biennials globally such as Istanbul Biennial, Zero1 Biennial (Silicon Valley), Kyoto Biennale, Artist Association Biennial in Haus der Kunst, Munich.

The artist /p has a degree in computer science and has been a leading developer of multi-user virtual reality and web based projects since 1994. Since 2018, /p has been creating AR, VR and AI artworks, both solo and in collaboration with Tamiko Thiel.

Maria Grazia Mattei and the best of possible futures

The director of Meet the Media Guru tells about her 40 years probing digital worlds to Sapiens. From telematic art to current days, “the right moment to change patterns”. Read the interview

Galaxy Network is a reality composed of several organizations from different sectors: companies, universities, exhibition venues, cultural institutions, event organizers, whose intent is to present immersive experiences to the general public. The purpose of the Galaxy Network 2021 is to create and coordinate a review of Virtual Reality experiences to be exhibited simultaneously in different […]

C’è tanto spazio laggiù in fondot, the project conceived for MEET, explores the relationship between art, science, technology and takes its cue from the title of the lecture delivered in 1959 by American physicist Richard Feynman There’s Plenty of Room at the Bottom, who became famous for his brilliant and visionary insights into the potential […]