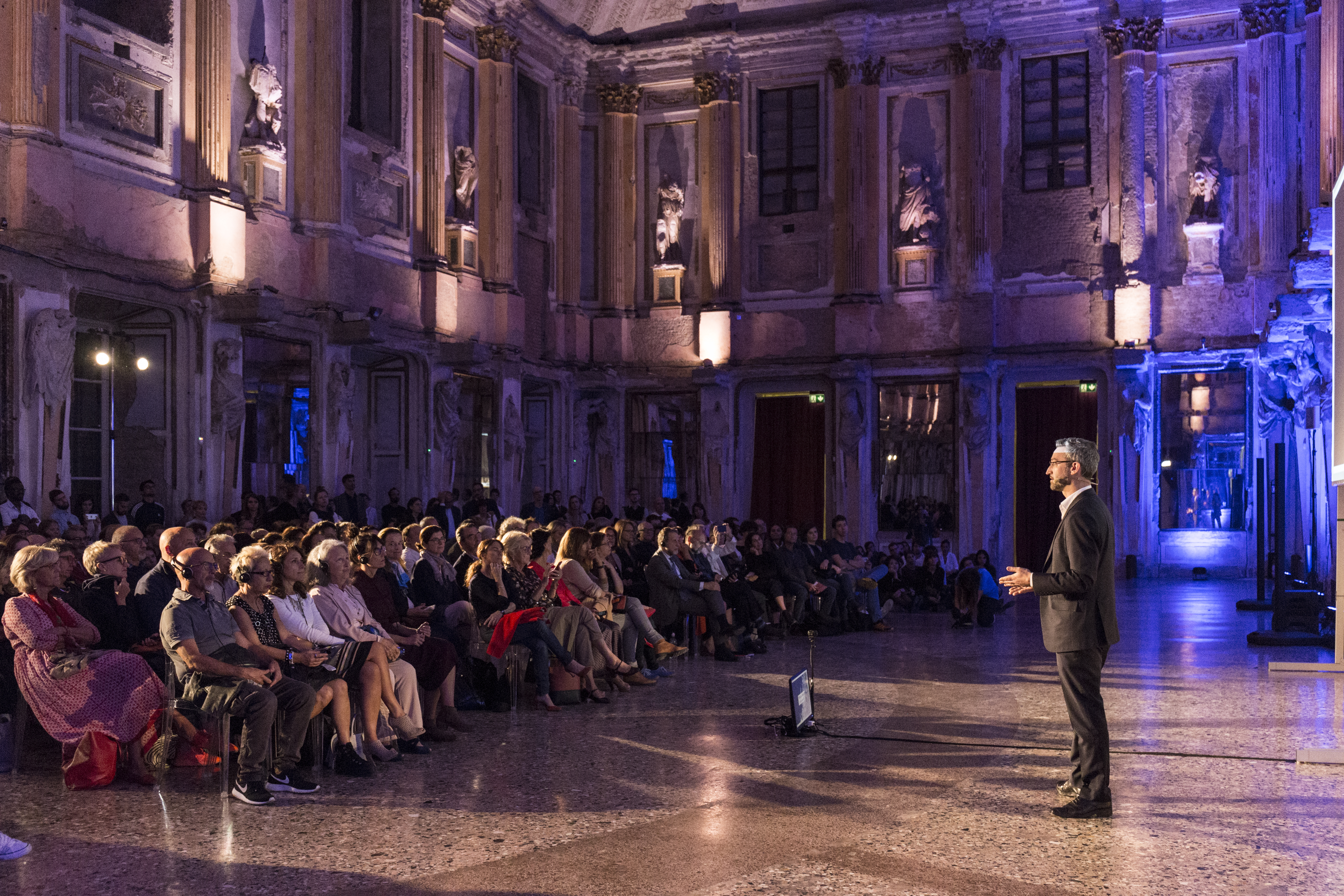 Noah Raford, Futurist -in- Chief of the Dubai Future Foundation and Director of the Connected Museum of the Future, tells Meet the Media Guru how to design the future thanks to an immersive and engaging exhibition space.

The competition in the art world today is played on the experience, interaction and interest that can be generated: museums must involve the visitor by creating new ways of enjoying culture. This is the thought of Noah Raford, Futurist -in- Chief of the Dubai Future Foundation and Director of the connected Museum of the Future, sixth guest of Meet the Media Guru.

In the prestigious location of the Sala della Cariatidi in Palazzo Reale in Milan, surrounded by over 400 people, the first and only Futurist-in-Chief of the World told how the city of the United Arab Emirates is a real City Lab able to experiment and look to the future.”Dubai was born as a successful experiment of coexistence of people of different cultures, ethnic groups and religions”. Being at the forefront is part of its DNA. It was inevitable that the Museum of the Future would be built here” states Noah Raford. Here you will find the full lecture.

The Museum of the Future in Dubai

How to face new challenges and the future? What awaits us? The Museum of the Future in Dubai tries to answer this question.

Talking about the Museum of the Future can sound contradictory: a museum has the task of creating a connection between past and present. But as a muse, the Museum of the Future is meant to be of inspiration for the future, to be home of immersive experiences, prototypes, workshops and temporary exhibitions of innovations. The core of this museum are not the works, but the visitor, who has an active role in it: see, touch, feel, live the future. “The keyword is participation” adds Raford.

The goal is to get people to think about the technological and immersive future that awaits us, in a fun and effective way, imagining the benefits that will ensue and learning to manage it without fear.

The Museum will open in 2019, in time for Expo2020 which will take place in Dubai and whose theme will be Connecting Minds, Creating the Future.

“We must not be afraid of the future and of the challenges that we will face, but rather we shall nourish a culture of hope”, these are the words of Noah Raford when he tells the story of tomorrow. A tomorrow made of collaboration and change, of exchange of ideas, experimentation and social innovation. Living in the Fourth Industrial Revolution, made of integrated technologies, all business fields of today are basically unthinkable without Artificial Intelligence. “Our goal is to be able to exploit and manage 100% the potential of Artificial Intelligence, the blockchain, Virtual and Augmented Reality. Under the motto of See the Future, Create the Future, at the Museum of the Future and the Dubai Future Foundation we envisage the future we would like and try to design it,” he continues.

By getting used to this idea of the future, people will no longer fear it, nor they will fear the growing use of robots in different occupational sectors. Machines will not replace human beings, but will create different jobs: “It’s all about accepting change,” adds Raford. “While the machines will perform long and tedious tasks today entrusted to men, humans will have more time for themselves. As I like to say Human for the best, robot for the rest “he concludes.

See all contents about Noah Raford

Noah Raford, the designer of the future

Let’s wrap up. The first six months of MEET

Rewatch the highlights: from the launch of the digital culture centre to the Deep Sight immersive installation to the MtMG evenings

How to design an immersive experience? The Canadian expert’s rules of inclusive design for museums and exhibitions