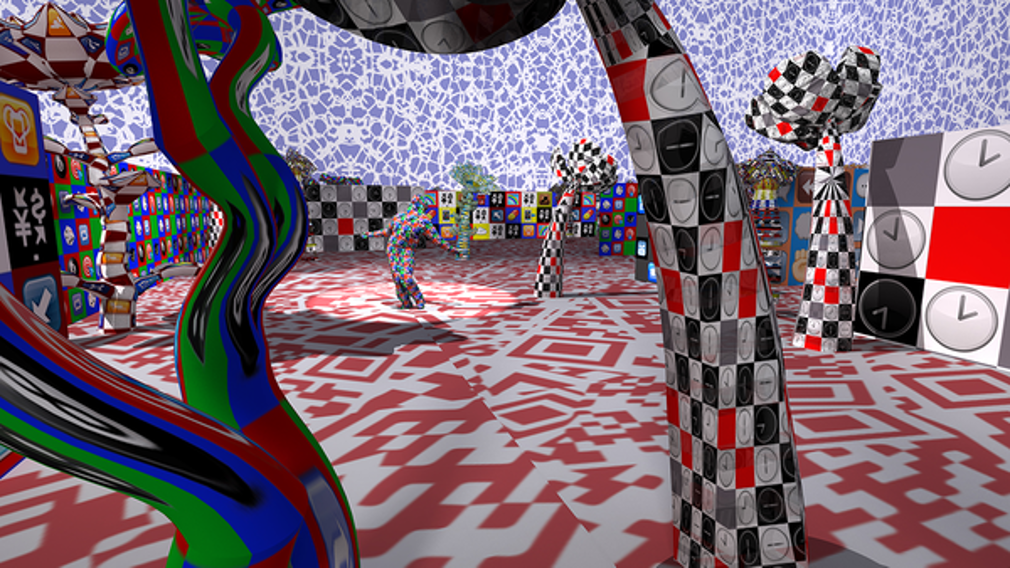 Claudia Hart is considered an early innovator in virtual  imaging, using 3D animation to make media installations  and projections, then later as they were invented, other  forms of VR, and AR.  Ms. Hart has a long engagement with creating gender neutral avatars partially as a result of being exposed to sexual misogyny while being in the art and tech field. She has always been keenly aware of the how women’s bodies were portrayed in the cannon of western art history and has been an eary innovator of creating non-binary avatars in her art work often blending men and women performers into a single figure.

Ms. Hart presents Alice Inside as a virtual immersive room installation in Synthetic Corpo-Reality. It is the Fourth work loosely inspired by Alice in Wonderland. In an earlier work Alice Inside, a  multi-channel computer animation, featured  live performances by ballerina (Kristina Isabelle) and professional wrestler (Isaias Valesquez ). The pair was digitally captured and then fused into a single gender neutral avatar who danced inside of an imaginary world. After Ms. Hart digitally recorded Ms. Isabelle’s dance and Isaias Valesquez, she built a VR experience merging both realities, and asked Edmund Campion to make software to create music for the piece.

In her latest work Alice Inside, Ms. Hart merges elements from different works creating a visual pot pourri which combines two different historical representational systems simultaneously: animation and the post-cinematic virtual. The viewer has the feeling they are inside an immersive real space and are watching a 4 channel projection of a “cyborg choreography ” from Alice Inside.

In Alice Inside, the avatar’s dance movements create corresponding movements of the virtual space itself.The effect is a strange new reality. In this new space, the viewer is privy to a rare fusion. The work becomes a visceral symphony of movement and music, while the virtual space pulsates and becomes animate.

“The Loving Ones” – Tim Deussen and Manuel Zimmer

“The Loving Ones” is a deeply personal piece that addresses the enduring nature of love despite the physical changes that occur with terminal illness in the body. The work celebrates the resilience of the spirit even as the body deteriorates. Documentary filmmaker Biljana Garvanlieva and her husband Manuel Zimmer’s brave artwork documents how Biljana chose […]

The new worlds generate new economies and new ways of working. For this reason the third track of In real, in web, in world opens up to the business world and to the many innovations that have emerged in recent times: from the design of virtual exhibition events to the new frontiers of blended working, from […]

all alone together – Martina Menegon

Vienna based Italian artist Martina Menegon focuses on interactive and MR art that reexamines the body and identity since the advent of cyberspace. She also creates interactive performances and installations. Ms. Menegon’s work challenges conceptions of identity and the fragility of our bodies, or as she puts it, “synthetic corporality” in her piece all alone […]

Carla Gannis’ virtual installation was inspired by the painting made by Gustave Courbet “L’Origine Du Monde”(1896). Using this as a source of inspiration, In 2019 Ms. Gannis made a series of sculptures out of bronze and other materials replicating this perspective of a woman’s body. Mr. Courbet’s painting clearly showed a woman with her legs […]