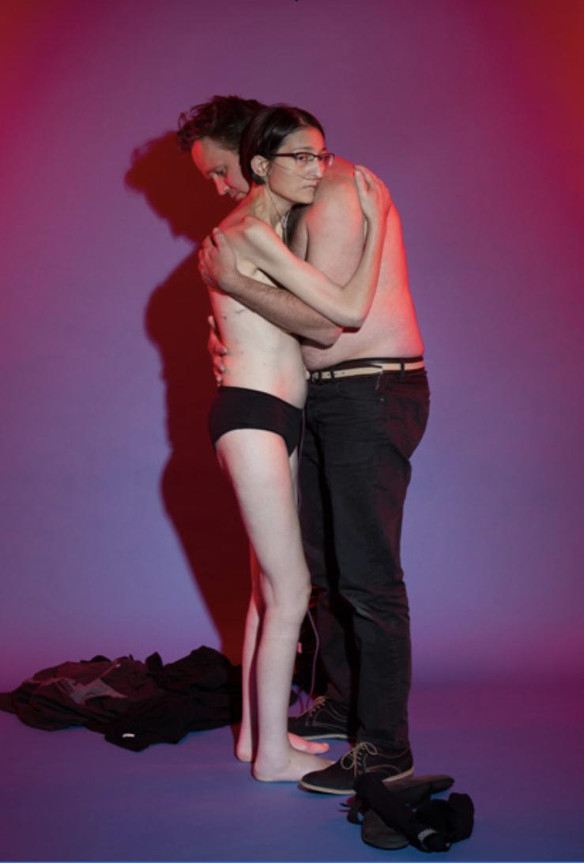 “The Loving Ones” is a deeply personal piece that addresses the enduring nature of love despite the physical changes that occur with terminal illness in the body. The work celebrates the resilience of the spirit even as the body deteriorates. Documentary filmmaker Biljana Garvanlieva and her husband Manuel Zimmer’s brave artwork documents how Biljana chose to fight her fears of dying by recording her time living with cancer. The couple asked Tim Deusse, a media artist living in Berlin to create this piece.

Tim Deussen made photos reminiscent of a similar series made years earlier when the young couple first met in Berlin.The Loving Ones has had several iterations as an AR work, then a VR piece, and now as an installation in the virtual platform Mozilla Hubs. In this new version the AR overlays originally seen over each photo will instead be seen as a paired photo and video work. The photos and videos show juxtaposed moments of happiness both before the diagnosis and after.This chronological  trip reveals  disparate images of the couple as young lovers, during pregnancy, on a walk in the park with their daughter rollerblading, and lastly on the final trip to the hospital.

Biljana was very cognisant of how women’s bodies have traditionally been depicted in visual art both paintings, sculpture and film throughout time. In particular, she wanted to celebrate a woman’s strength depicting her own changing body in a reverent and powerful way. When her husband first undresses her, he looks up at her while at her feet, as if she is a sculptural deity.

Manuel and Biljana’s love is palpable  throughout the photo and video series. Love encased in two bodies  despite the changes of age and illness.

The meeting with Gilles Jobin is the first in the new series created by MEET: Meet the Media Guru Swiss Edition. We will host many personalities of innovation in collaboration with the Consulate General of Switzerland in Milan.

Dream Builders – The Cenotaph of Newton

Shanghai artist Zhou Xiaohu is considered a pioneer in new media art. In this historical work, The Gooey Gentleman (2002)  Zhou Xiaohu portrays the figure in surprising ways using the torso as an actual canvas on which he draws a narrative tale of the sexes. During this period in China there were vast architectural changes […]

The new media are grafted onto the old, overturning their forms, languages and methods. That’s why Mediaverses, the second track of In real, in web, in world, focuses on the media world and especially on immersive information, 360-degree videos and VR cinema and gaming. Designed as a workshop path, it alternates dissemination with paid seminars […]