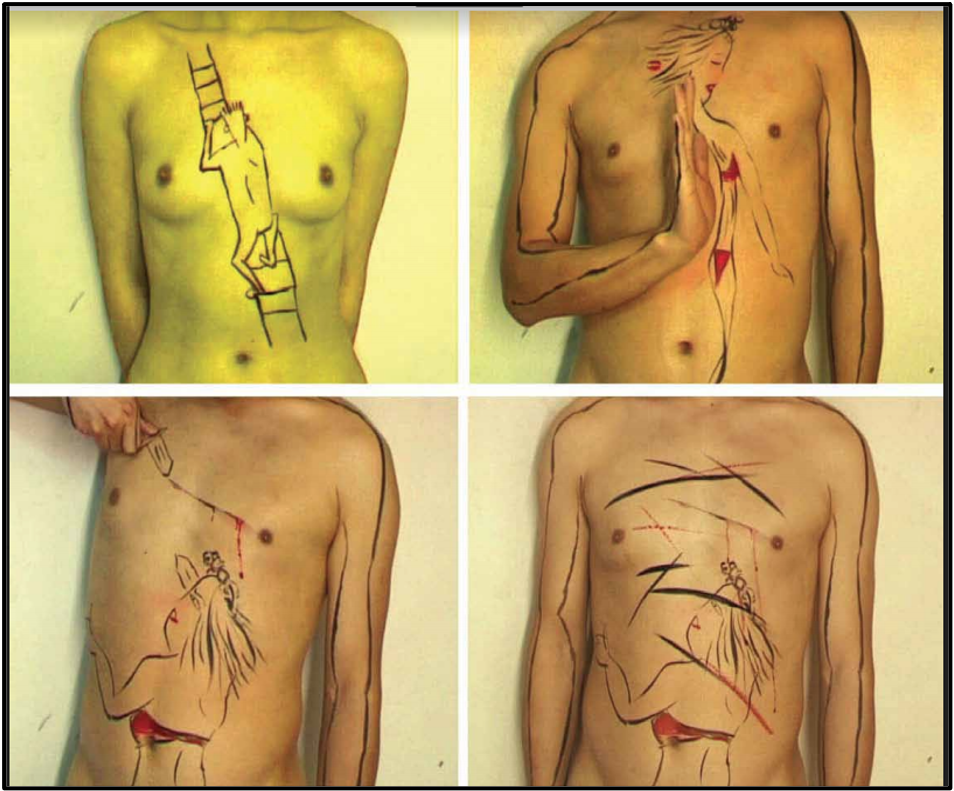 Shanghai artist Zhou Xiaohu is considered a pioneer in new media art. In this historical work, The Gooey Gentleman (2002)  Zhou Xiaohu portrays the figure in surprising ways using the torso as an actual canvas on which he draws a narrative tale of the sexes. During this period in China there were vast architectural changes as urban centers were bulldozed in areas to be replaced by skyscrapers and more modern designs often not subject to urban planning. The artist community reacted by creating works featuring the figure as a focal point as the quest for identity became pivotal to their practises.

In The Gooey Gentleman, Zhou Xiaohu created both a male and female nude torso for his stop motion video animation on romantic relationships. In the video, a woman is drawn by hand onto the skin of a nude, male torso. (Actually the male torso is the artist.) At first, the cartoon woman is quite happy with the artist’s rendering. She is created to be among other things an exotic dancer. However, soon she wants to reinvent herself and becomes angry at the parameters he has set for who she should be and what she should look like. She ultimately escapes, goes into the man, and draws him into a cartoon on her nude body. The man then escapes and they duel with a surprise outcome.

Mr. Zhou uses stop motion animation as a pretense to discuss not only male-female relationships but also as the artist says,”The work focuses on manipulation and anti-manipulation in a relationship between the creator of the subject and the creator of the object while promoting all kinds of paradoxical spaces. Conflicting images of who is watching and who is being seen reverse aesthetic tastes.The work presents the conflict and integration of personal psychological space and a public psychological environment”.

In real, in web, in world. The programme

In real, in web, in world is an exhibition entirely dedicated to the discovery of immersive realities and their impact on the worlds of art, media and business, curated by MEET as part of a media partnership with Rai Cinema Channel. From 360° videos to Virtual Reality via Mixed Reality, virtual tours and social world […]

“The Loving Ones” – Tim Deussen and Manuel Zimmer

“The Loving Ones” is a deeply personal piece that addresses the enduring nature of love despite the physical changes that occur with terminal illness in the body. The work celebrates the resilience of the spirit even as the body deteriorates. Documentary filmmaker Biljana Garvanlieva and her husband Manuel Zimmer’s brave artwork documents how Biljana chose […]

American curator Julie Walsh and XR researcher and developer Michael Kam Barngrover presents and overview of social VR platforms best for exhibiting art and will include a discussion of the pros and cons of each platform as well as hardware requirements. Participants will be led through conception, and exhibition design planning. The workshop will be […]