This is the story of a transformation 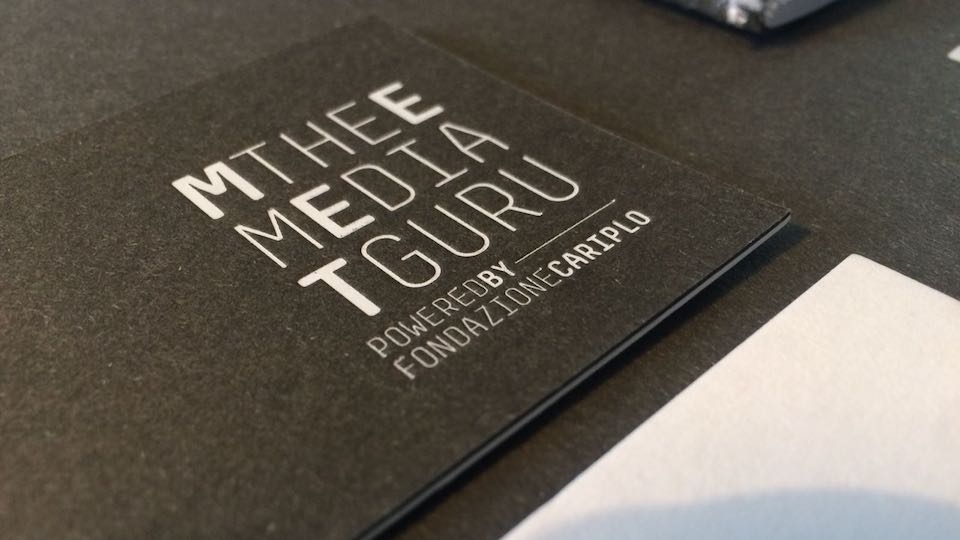 What I do in my daily work has an important sounding name, “brand transformation”. This, though, was Meet the Media Guru, the outstanding project of my friend Maria Grazia Matteiwho invested energy, time, commitment and an important part of her life in it. It was not merely about restyling its co-ordinated image, it wasn’t about the new website or writing a new video-manifesto. In the past I had already happened to work with Maria Grazia in art direction projects, though the project here was organising the launch of the new international centre for digital culture. Among those involved, Fondazione Cariplo, a sizeable investment by the City of Milan, Meet the Media Guru and its historic presence in the project and the psychological and emotional involvement of Maria Grazia, who had to be welcomed, respected and heard. Many variables that had to converge, align and work in synergy in order to accomplish such an ambitious project.

We spent the first few weeks looking for a name to give the Centre. We wanted to convey the physical presence of the space, evoke the paternity of Meet the Media Guru from which it all had begun, indeed forge a new centre for Digital Culture, while at the same time telling about what had always happened over fifteen years of events featuring the most important minds in worldwide contemporary thought, come to Milan to expand our horizons. The solution had been there all along, in the first document Maria Grazia had discussed with those involved. It was already written. Nevertheless, no one had seen it yet as a suitable name, let alone a possible brand. And still, MEET was about the most important thing we were after: “encounter”; it meant that behind it there was Meet the Media Guru, and from it, it set out to underline its intentions, its vocation and the lines we were supposed to follow from then on along the whole journey of this project. The full Meet the Media Guru team was there, Sara Angelini, Lorenza Delucchi, Matteo Camporeale; without them all this would not have been possible. And again, our friends Nicola Bruno and Francesca Folda  in their capacity as skilled and specialised advisors for every decision made. We were ready, scared and busting with excitement.

I met Alessandro Boscarino, and I don’t think it would be unfair to define him as one of the most gifted and obstinate graphic designers around. Together we worked on the brand system of MEET. A visual alphabet where new reality appeared to want to catch the old one in a dynamic and responsive embrace.This liquid reality was capable to speak a basically endless set of languages that celebrate Meet the Media Guru while ushering an unprecedented reality, setting out on the migration path that will unfold along the journey.

Then, we had to redesign digital identity, build a system for the priceless heritage kept in the content archive already displayed in the Meet the Media Guru archives, organise everything in order to provide our users with a unique experience while searching, analysing, familiarising and discovering the multiple ways to access this incredible wealth collected over the course of many years. There was only one person able to pull it off by matching usability and design, aesthetics and function; I call her the “fairy of numbers” for her ability to turn algorithms into works of art.

Her name is Giorgia Lupi; with her team at Accuratshe took care of designing the new digital home of the Centre, defining a new language based on data visualisation.

The platform revolves around a timeline, which hosts all past and future content of the Centre, and which can be explored and discovered in one of many ways. Users may start browsing by selecting a number of topics of interest from the platform or opt for a focused search by individual gurus; moreover, they can set a specific time interval and discover the contents by navigating across the timeline using colour-coded modules. Indeed, colours were used as a code to recognise the various types of materials: videos, events, galleries, articles and books. 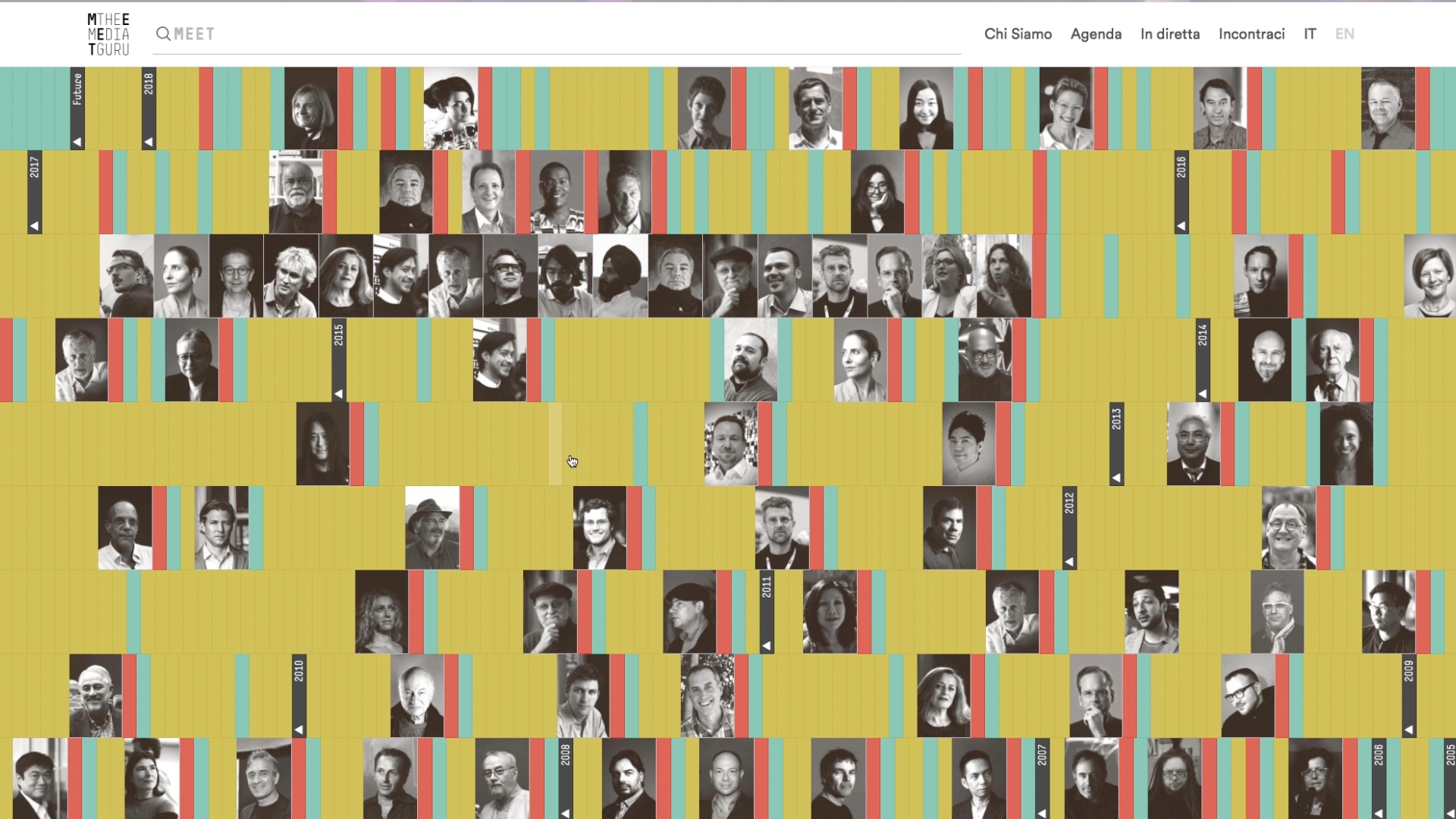 Content visualisation is extremely dynamic, it adapts to the search filters and tags with the purpose of displaying as many details as possible with the increasing depth of a search. The versatility of the interface is generated by an algorithm calculating the space and shape of the modules according to the number of research hits and the resolution of the screen. This characteristic allows to have multiple result visualisations, thus pushing users to exploring contents while enjoying a different yet well organised experience every time. 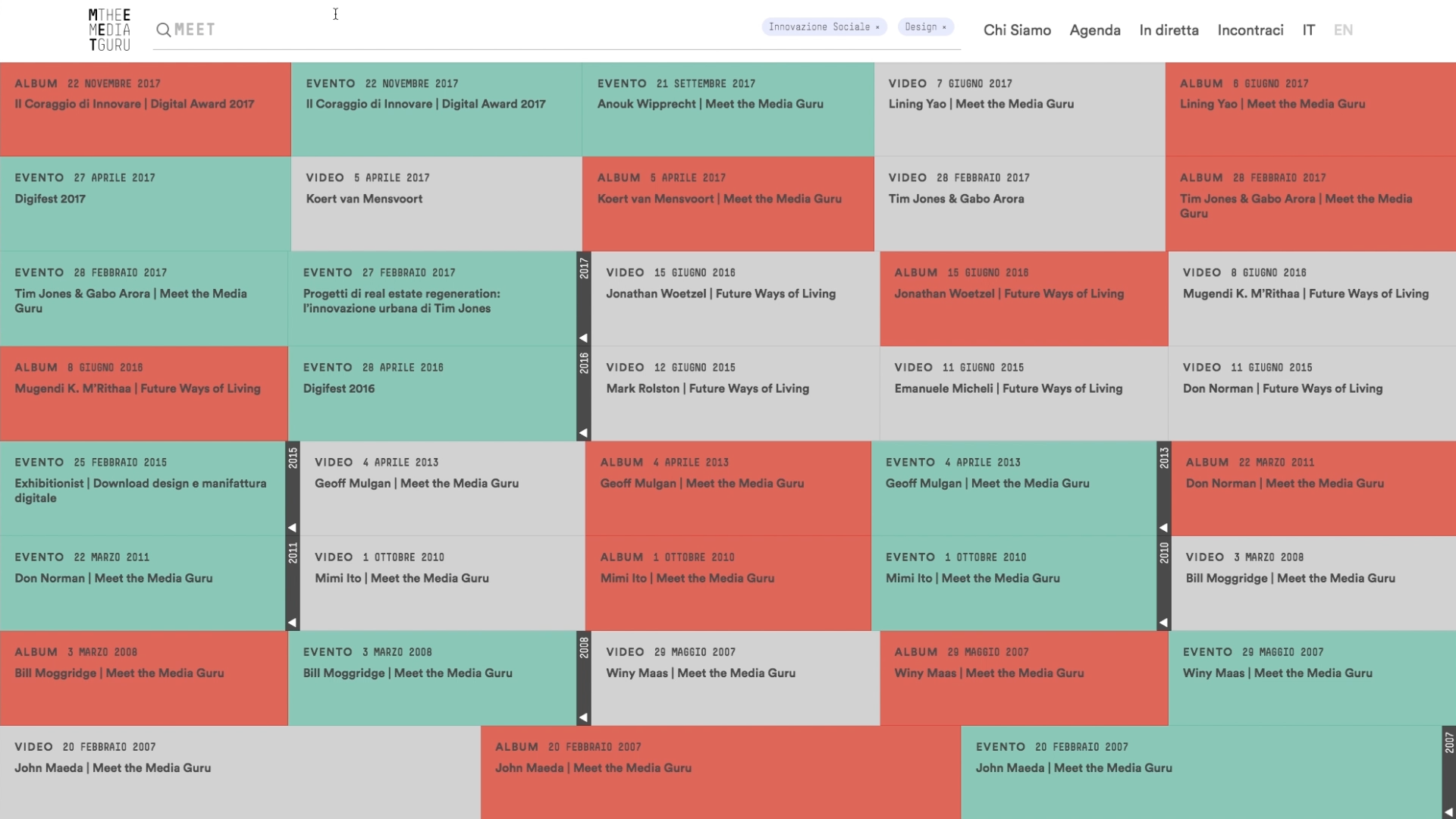 The output of the new MEET platform is no longer the same old list we are all used to, but rather a visualisation that changes radically in terms of colour and shape depending on the amount and type of contents solicited with the search. The visual output may vary from a thick network of elements reminiscent of the cultural weight of endless library and archive shelves for more general searches, to orthogonal colour blocks taking large portions of the interface to turn content into a manifesto.

Now, before setting the whole project in motion, we needed to define the positioning. And we decided to trust this task to a video able to distil the spirit of MEET in a handful of seconds: its drive to stand as an observatory and a cradle of knowledge. A sort of shelter against the hurricane making landfall on our lives and revolutionising every element of our existence, in order to offer a new understanding. I wrote a sort of manifesto that the team at Antimatterhas animated thanks to the talent of Emanuele Colombo; today, the international centre for digital culture already expresses its vocation and ambition but, most importantly, asks its recipients what they seek in it.

Finally, we were ready. We hired Marisandra Lizzi’s team for the press conference of last 26 February, which obviously had to be something more than a simple press conference, and Claudio Prati, a long-time director of Meet the Media Guru, who offered hints and suggestions for the staging. I asked Samuele Franzini’speople to experiment with one of their visual installations to add a little to the conference to be held on the stage of Piccolo Teatro Studio Melato and the many people in the room could get to know MEET; during the addresses by Mayor Giuseppe Sala and Giuseppe Guzzetti, Chairman of Fondazione Cariplo, images appeared in real time on the screen, alternating like a huge sphere of nervous strands interacting with the audience. 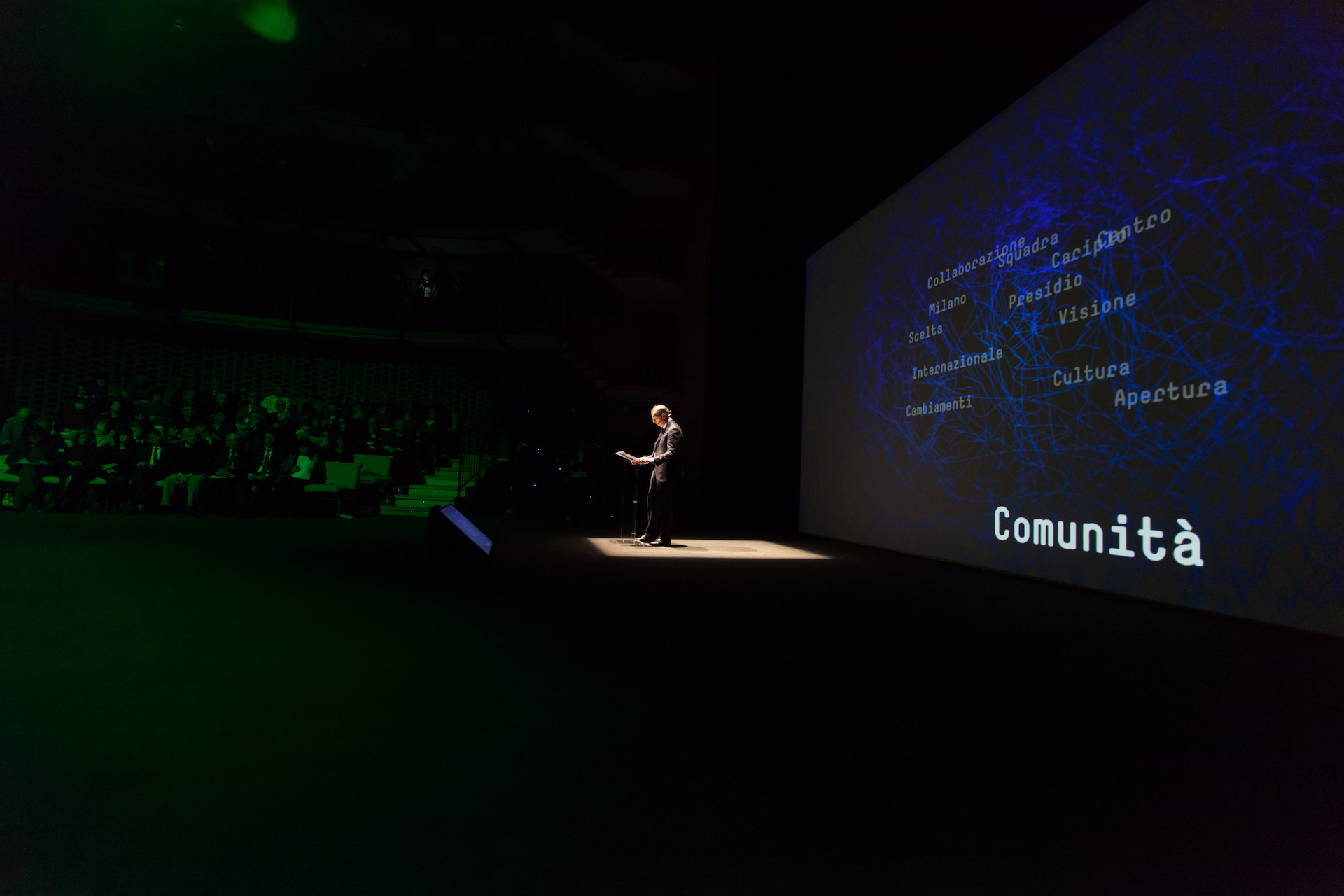 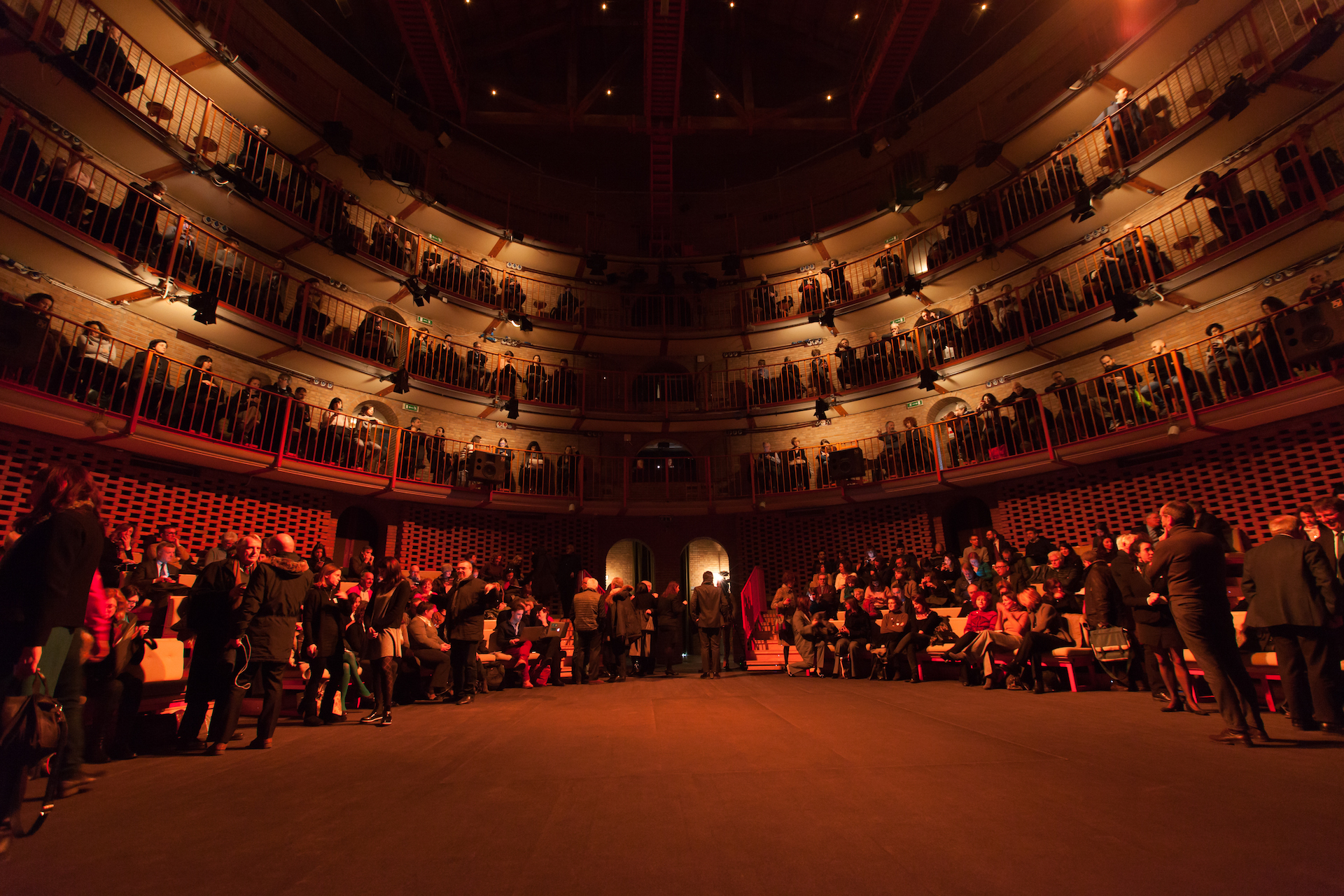 #nascemeet took very few minutes to climb to the top of the trend topics of the day on Twitter. What was happening was rapidly rebounded by hundreds of users who passionately welcomed the birth in Milan of the new international centre for digital culture.

This place is called MEET. And in a few months, it will have a home of its own, a physical place to finally meet.

Today it has an identity and a digital home that originated from the transformation of Meet the Media Guru, which I had the privilege of coordinating and I attempted to describe in these lines.

MEET in progress. The construction site at Porta Venezia

Workers at work at the former Spazio Oberdan in the heart of Milan. The digital culture centre will develop on a 1500 square metres surface, all in “sense and respond” mode

The summer of MEET, discover what’s next

Heading to a super-busy July. Three experts from three continents talking on Art, Science and Technologies, a full day on Cultural Innovation and other more