Augmenting reality does not only mean immersing ourselves in futuristic scenarios. Or just try to impress consumers with new ads (like Pepsi did in London) or innovative services (see the new app by Ikea). AR can also be an opportunity to show new aspects of reality and, thus, try to build a critical discourse on public and private spaces that are part of our daily routine.

This is exactly one of the goals of Keiichi Matsuda and his projects on Hyper Reality: not so much amplifying reality to show us a technologically advanced future, but better showing the social and cultural consequences of said innovations. A critical design idea that in many aspects is similar to the design of other activists and computer artists who use augmented reality to channel unexpected messages. 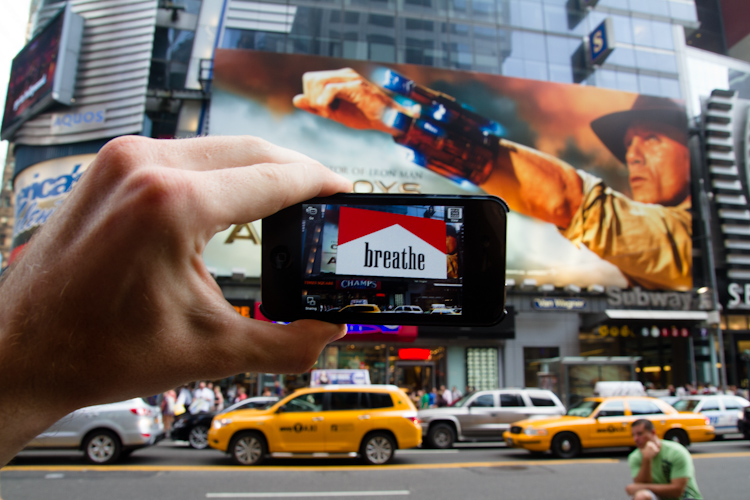 With The Heavy Project, Public Ad Campaign designed AR | AD Takeover, a project launched in 2011 to replace the neon signs of Times Square with alternative messages visualised from the screen of an iPad or iPhone. In brief, a case of augmented ad-busting, also meant to be a criticism to the way marketing invades urban landscapes.

NO AD is the name of a new app also released by The Heavy Project and Public Ad Campaign. In this case, when a smartphone of a tablet is directed towards one of the billboards in the New York underground the work of many young artists may be visualised. The minds behind the project see this app as a prototype of physical ad-blocker that may soon hit the market.

We see NO AD as a precursorto a viable physical ad blockingsoftware that, used in conjunction with soon to be available heads up display technologies, will drastically alter our relationship to visual imagery in our shared public spaces.

In turn, the video “Sight” by Eran May-raz and Daniel Lazo, two Israeli students, explores the changes in social and personal dynamics. The film features a young couple going out to dinner and flirting, as they wear reality augmenting contact lenses, with the continuous addition of texts, images, graphs and suggestions from the connected apps. The epilogue is not exactly pleasant…

This cultural criticism to the invasiveness of augmented reality and other predictive technologies that, as written by Forbes, lets us understand how technology can kill, instead of boosting, our liberty.

To paraphrase visionary English Romantic poet William Blake, “If the doors of perception are controlled, the threat to freedom will appear to man as it is, Infinite”

Waiting to continue our dialogue with Keiichi Matsuda, we share his heartfelt welcome from London. The event will take place on 14 Octoberat Mediateca Santa Teresa.

Paul Daugherty is the Chief Technology and Innovation Officer of Accenture and the co-author of Human + Machine. Reimagining Work in the Age of AI. Join Paul’s lecture. You find us here: ﻿﻿ If you cannot join us, you can easily connect on line. Discover more. Social Cast is the Meet the Media Guru activity […]

The topic is Nature + Tech: can they be integrated for mutual benefit? How is design going to change after the pandemic? Watch this lecture on MEET’s website