After having told you about the Guru Day 1, here we are to summarise the Guru Day 2 of Special Edition Future Ways, a window on the lifestyles of the next 10 years. Meet the Media Guru, which conceived it with the Institute without Boundaries of Toronto, received the supportof the official partner Fastweb, as well as Artemide,Fondazione Fiera Milano,Milan Chamber of Commerce,City of Milan, City of Torontoand the General Consulate of the Netherlandsin Milan.

#FutureWays opened on Friday 12 June at 3.30 pm at Mediateca Santa Teresa. Breaking the ice, Derrick De Kerckhove, a sociologist of digital culture and Director of Media Duemila, offered an overview on ethos and transparency in the age of Big Data, touching upon politics and control, already mentioned by another guest, Lawrence Lessig.

After the video message by Steve Mannin his capacity as father of Wearable Computing, the design topic – analysed to the smallest detail during the first of the Guru Days – was delved into by Mark Rolston, Designer and founder of Argodesign: according to Rolston, in the next ten years design will become progressively invisible, with cognitive systems that will be more and more integrated in daily life.

Freddy Paul Grunert, Visual artist and curator at ZKM, presented to the audience in the room and streaming viewers from all over Italy a project conceived in bundle with astrophysicist Fabrizio Tamburini onphotons as channels for data transmission and surely a question popped up in the minds of many viewers: will teleportation ever be possible? 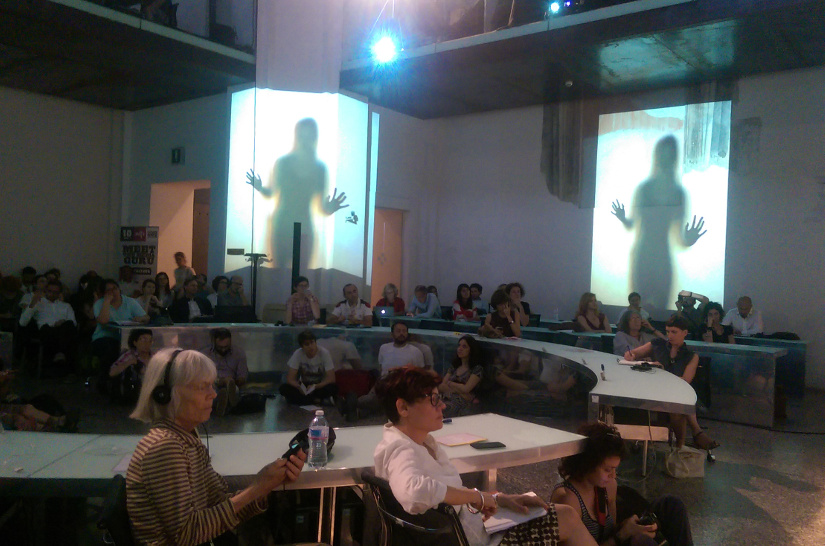 Surfaces as spaces for relation at Mediateca

Electronic device screens, reflecting façades, visual installations are becoming sensitive membranes through which we experience relationsthat are more intense and emotional, thus being a second skin, a tactile and subsequently visual film.

From surfaces to Augmented Reality withKeiichi Matsuda, artist and visual designer, who explained howthe communication of the future will go through technology interfaces that will become reality.

As #FutureWays was once again a trending topic on Twitter, the time came for a talk by Paola Antonelli, Senior Curator Architecture and Design and Head of Research and Development at MoMA, New York, focusing the discussion on the future of museums. From the rise of the first websites to on-line-only exhibitions, today a museum exhibit may no longer be just physical. The category may include video games, special characters, large thematic projects. A key element, today as much as tomorrow, remains the ability to involve the public inside and outside the museum.

After the networking time at the Mediateca garden, curated by Tempio d’Oro, the audience in the room and on the Web all over the Country enjoyed a taste of VOX.solo, an interactive dance performance byAriella VidacheClaudio Pratiof AiEP. Visual Media Art was also the topic of conversation with Luc Courchesnewho underlined how the experience of art is also an exchange between real and virtual. An immersion bound to have a deep impact on performing arts.

Closing the second and last slot of the Guru Days wasMarcus Wendt, visual graphic designer who, together with his team FIELD, mixes imaginary visions and advanced technologies, such as drones, to create futuristic and visionary scenarios.

The next appointment with #FutureWaysis on Friday 26 Junealways at Mediateca, for the Toronto meets Milanoevent and the première of the documentary shot during the Special Edition. This will be an opportunity to devise visions for the future of the two cities, twinned since 2003, and share them.

See all contents about Paola Antonelli

In 2009, as a guest at Meet the Media Guru, Lawrence Lessighad spoken about governance, transparency and participation. At the dawn of the Obama era, the founder of the Stanford Center for Internet and SocietyandCreative Commonshad very clear in his mind that the most powerful democracy in the world (and many other with it) are going […]

#Gurubook: the Meet the Media Guru box is available in bookstores

Meet the Media Guru celebrates ten years in bookstores with the box A tu per tu con la cultura digitale curated by Maria Grazia Mattei and published by Egea; the box consists of the lectures by ten gurus held in Milan between 2005 to now on such topics as Smart Cities, Social Innovation, Digital Humanities, Web […]

From Charrette to Toronto meets Milano. The grand finale of Future Ways

Friday 19 June at Mediateca Santa Teresa marked the end of theCharrette of the Special Edition Future ways of living. Organized by Meet the Media Guruand theInstitute, the urban design laboratory adopted a multidisciplinary approach to design 6 visions of the future on such thematic focuses as Energy & Economy; Education; Mobility; Food; Health and Well-beingandCommunication & Culture. The […]

charretteFuture Ways of Living
I agree